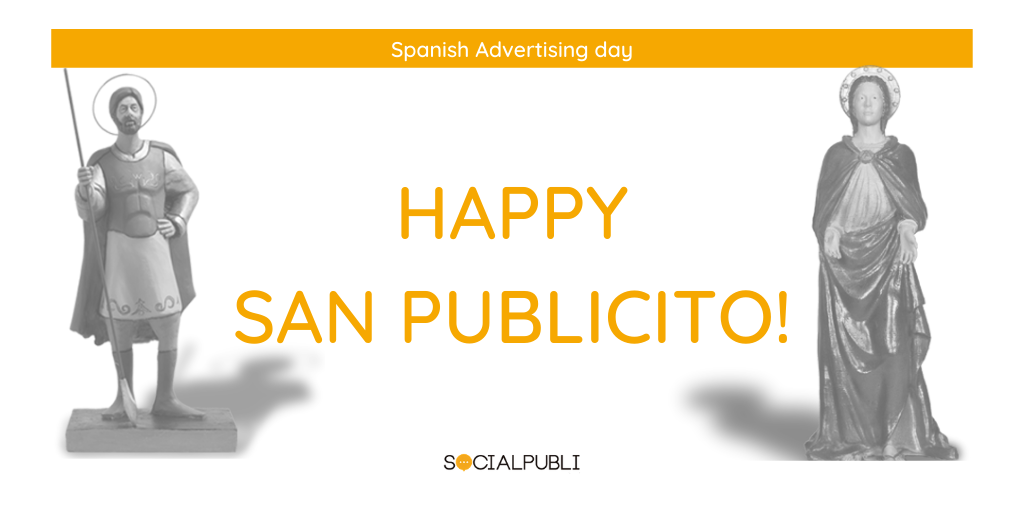 Today, the saint of advertising celebrates his birthday. How we advertise has been evolving over almost three decades. First, we started focusing on the online world, and this has evolved into the micro-influencer marketing strategies.

How San Publicito was born

San Publicito has become a significant date in all advertisers’ calendars, not only because he is their patron saint, but also because many of them get a day off to celebrate this holiday. San Publicito is named after the apostle St. Paul, who was commissioned to spread the word of God about 2020 years ago. St. Paul is celebrated on January 25th, the date chosen to celebrate the St. Publicito’s holiday as well.

But… Why do we celebrate San Publicito this year on the 31st then? This is because, in its origin, the State Collective Bargaining Agreement said it would be held on the last Friday in January. So, it will only coincide with the official date on certain occasions. Spoiler alert: We’ll have to wait until 2030 for the two events to coincide.

It was the advertising agency Penauts&Monkey (at that time Bassat Ogilvy & Mather) that came up with this idea in the early 90s as a joke. It was only a couple of years later that The Grow Agency created the female version of the saint, called Santa Publicita, with the idea of highlighting the role of the woman in the sector.

The evolution of advertising

Already in the 90s, with the emerge of private TVs, advertising is experiencing a new niche that is exploding. Who hasn’t ever suffered from the advertisements between their favorite tv programs? But with the birth of the internet, everything has changed. Brands have now the opportunities that were unthinkable only a couple of years ago: to be able to communicate immediately and directly with their audience.

However, the internet changes this paradigm. The possibilities of segmentation that companies have nowadays are incredible. It’s already surprising that the audience can be divided by location, sex, age, hobbies, and/or socioeconomic level. But segmentation, nowadays, eve goes beyond that. Facebook, for instance, knows everything about our lives (or at least about what we tell them), and can segment on every detail it knows about you.

Right when we think publicity couldn’t go any further, micro-influencers start turning around the traditional way of advertising.

With micro-influencer marketing, the followers do not perceive that the influencer is trying to sell something, but that a reference, whom they trust and whose opinions matter, is recommending them a product that will be good or useful for their own.

Also, the SocialPubli Influencers Study, published in October 2019, reveals that the best way to make your product look fashionable is to rely on micro-influencers to promote the product, since they are the ones with the greatest prescription power.